Wednesday evening was the JEA Annual Meeting.  Jamie Richman and Julie Schwartz envisioned “Better Together” as the title of the evening and from the premeeting BBQ to the recognition of staff and volunteers, it was part party, part meeting.

Given the events over the last two weeks when thousands walked through the doors, it’s clear that the Alliance’s place in the community is as strong as it was in 1912.  People come here to learn, to celebrate, to meet, to exercise, to gather.  As former President, Robyn Levy Carroll said when she became President, “The JEA is the town square for generations of Savannahians and everyone has a place here.”

One of the highlights of the Annual Meeting  was when President, Larry Silbermann gave out the JEA Community Service Award.  Created in 2017, the award is to recognize individuals for service to the community.  Former winners include Tom Kohler, Judge Michael, Karpf, Dare Dukes, and Mayor Van Johnson.

This year’s honorees are Dayle and Aaron Levy.  I could write a book about Aaron and Dayle, but Larry Silbermann’s words tells the story.  I share his presentation with you here:

A couple of days ago, the Savannah Jewish Federation awarded its highest honor, the Jack M. Levy Award to Stephen Greenberg, a well-earned and deserved honor. Tonight, it’s my pleasure to give out the highest award the JEA bestows, our Community Service Award and coincidently it also involves not just one, but two Levys.

My first encounter with Dayle and Aaron Levy, much like most people in this region, came from their television commercials on WTOC.

The spots would feature Aaron and Dayle Levy standing side-by-side, as they have been as partners in marriage and in business since 1963.

They would tell us that they were just back from a trip to Israel where they’d purchased a cache of diamonds at a discounted price, and like with everything they do, they wanted to share their good fortune with us.

A microcosm of who they are not only played out in 30 second increments on TV, but also in the way they live every moment of every day.  Their support and loyalty know no boundaries be it our Alliance or Federation, Hadassah, or the United Way, the Telfair Museum, Hospice Savannah, Savannah Music Festival or countless other local, national and even international non-profits.

When we launched our current Capital Campaign, Aaron and Dayle were among the first to step up by writing a check and then by asking what else they could do to help. The Levys have always led by example, which is why they work tirelessly to ensure the JEA remains on solid footing, a family tradition that goes back as far as the early ‘50’s when Aaron’s [grand] mother literally help set the cornerstone of our great facility.

So as it was with Jack and Miriam, it remains with Aaron and Dayle, the Levys have been builders of this Alliance for generations.

Aaron, as a past President of the JEA, remains incredibly active in the governance of the organization, in fact, he likes to say, “I don’t have a vote, but here’s what I think.” I can assure you his thoughts and opinions carry far more weight than any one vote ever could. 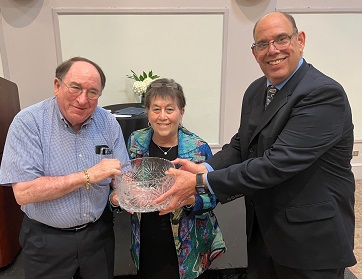 As for Dayle, her idea of a family business had little to do with ownership and more to do with employee and customer relationships. You’d be hard pressed to find a person who had an encounter with her who didn’t walk away thinking they had a new friend, because the reality was, they did. Dayle was also able to use her sales skills to become one of our area’s most prolific fundraisers.

I will let you in on a little secret, whenever I was at a loss for words, or needed a little inspiration or a lot of historical perspective, I would always turn to Craig Harney. It’s been a struggle since we lost Craig to find someone to help continue to tell the great stories of Savannah. But as I was researching some of Dayle and Aaron’s accomplishments, I was reminded that they were honored as Junior Achievement Laureates and were inducted into the Savannah Business Hall of Fame back in 2006. I was able to pull Craig’s story on them from our archives, so I am able to share a bit of his wisdom and insight.

In that video, Aaron talked of how they came very close to selling Levy’s to a national chain but decided, at the very last minute, to walk away from the deal. Aaron and Dayle worried, and rightfully so, that a nationally owned, big box entity would destroy the family values and loyalty that have a been a benchmark of Levy’s since its founding in 1900 and remain so very much today.

Family is everything to Dayle and Aaron, but that essence reaches beyond their two sons Phillip and Richard and their grandchildren.

In that Craig Harney video I referenced, Dayle ends it by saying community service and family are the mains reasons to be alive and all these years later, Dayle and Aaron are the living embodiment of that philosophy.

It is my honor to present our 2022 Community Service Award to Aaron and Dayle Levy.

Kol Hakavod to Dayle and Aaron Levy, two people who embody service to others. 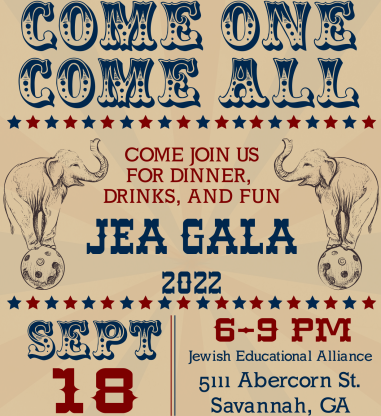