On Tuesday, Jamie Richman came in to discuss one of the programs that the Savannah Jewish Federation organizes: Idenifying and sponsoring a local teacher to attend the Holocaust & Jewish Resistance Teachers Summer program, a two+ week seminar for teachers with educational activities in Poland and Israel sponsored by the American Gathering of Jewish Holocaust Survivors.  For the better part of two decades, teachers from area schools have participated in this program thanks to the Matthew Jason Cranman Holocaust Teacher Fund of the Jewish Community Foundation of Savannah.

Created in 1999, in memory of Matthew Cranman, the fund was created by his parents and grandparents after Matthew lost a courageous fight with cancer in 1997.  It was their hope that “recipients of the scholarships awarded by this fund will use their experiences to share with Savannah students the light of the Jewish spirit and illuminate a dark period in history.”

Over the last twenty years there have been over a dozen teachers from public and private schools who have attended this seminar and then brought back what they learned to generations of Savannah students.

But back to our discussion…. due to COVID and the travel shutdown, there has been no participant in the last two years. Jamie went on to tell me that she did not believe the American Gathering was sponsoring a trip this year and that they have not done one since 2017.  But, she had sourced an similar alternate program through the Holocaust & Human Right Education Center in White Plains, New York.  While not as extensive as the former program, this trip to Germany and Poland offers “a unique opportunity to visit the sites of the Holocaust in Germany and Poland and learn from experts in the field to gain a “first-hand knowledge to help understand the meaning of the Holocaust and pass on the lessons we have learned for the future.”

We ended the update meeting agreeing that this was a great option to take and to reach out to our contacts in the community to identify the person or persons to share this opportunity with.  I left Jamie to do “the magic” of matching program with participant; to identify those who would take this experience back to our community to build student’s knowledge and sensibilities.

It was a mere two hours later when Jamie came in to the Fitness studio with a smile on her face, “You won’t believe who just called me…I just got off the phone with Karen Cranman, what a coincidence.”  She called to see if there was any opportunity to send a teacher on an educational program….talk about timing.

When Jamie told Karen that we were just talking about it and were working on the program she told Jamie that they call that “a Matthew moment.”

I never knew Matthew Cranman, he died long before I joined the Savannah community, but reading a eulogy from his funeral about his unceasing compassion and concern for others, his sense of humor ability to laugh, the depth of his character, and his zest for life, I can’t help thinking that Matthew moments are far too few in our world.

His legacy lives on with the memory of the special man that he was and the Federation program that his family created for years to come.

For over four decades The Jewish Community Foundation of Savannah, a program of the Savannah Jewish Federation, has been working with our donors to create plans that meet their charitable giving wishes and provide for the Savannah Jewish community in perpetuity. 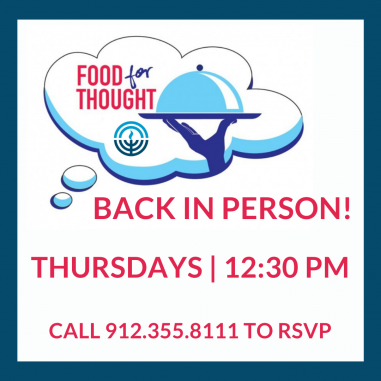