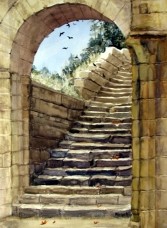 Marilyn Lyon Foley, an internationally acclaimed watercolorist, is a graduate of Wellesley College and a Wellesley Scholar. She received a BA degree in Art History and later did graduate work at Rutgers University and the Art Students League in New York where she studied with Reginald Marsh. Foley later returned to Wellesley to teach painting and sculpture.

Thirty-five years ago, Foley left the classroom to paint professionally full time and in 1993 moved from New York to Savannah, a move which has provided her with a bounty of new images bathed in soft southern light. Foley has been inspired by Savannah and the many places she has lived and traveled. Among her works are marine scenes from the Massachusetts coastline, farmhouses from Provence, village roads from Burgundy, church domes from Italy, brightly painted doors from Santorini, and the romantic ruins of Fountains Abbey in Yorkshire.

Foley’s paintings have been exhibited in New York City with the Knickerbocker Artists, as well as the National Arts and Salmagundi Clubs, the Education Department of the Museum of Modern Art, and the World Financial Center. In 2007 she was chosen by the National Cathedral in
Washington, D.C. to be part of their Centennial Celebration. In a one-woman show over 20 of her watercolors of the Cathedral were exhibited throughout the year 2008. She is a member of, and has received awards from, the Copley Society of Boston, the Hudson Valley Art Association, and the Catherine Lorillard Wolfe Art Club. A Signature Member of the National Watercolor Society, Foley’s work was included in the Society’s 1998 Annual Exhibition and was one of 30 paintings chosen for a year-long traveling show. Close to home, she has exhibited at the Telfair Museum and has received four Best in Show ribbons and five other awards from the Landings Art Association…including a first prize for watercolor in 2014.

Foley’s biography is included in “Who’s Who in America” and articles about her work have appeared in “The Artist’s Magazine” and “Watercolor Magic.”